MIRO volunteers have been actively trapping in East Harbour Regional Park for 20 years.  The initial target was possums in the Northern Forest, which were severely damaging trees there. These days the intent is to control a wider range of pest animals, including possums, mustelids, rats, hedgehogs and feral cats across both the Northern Forest and at the Parangarahu Lakes.

MIRO, with the support of Greater Wellington, services a network of 470 possum traps, with volunteers visiting their trap lines monthly. In the Northern Forest, this dedicated work has reduced possums to a low level and has helped the forest to recover—signs of this are becoming more obvious.  For example, our large iconic Northern Rata now bloom profusely, and the regrowth of smaller broadleaf plants is producing more seeds, providing food for birds such as riflemen, which are now regularly seen on the front faces of the forest above Eastbourne—something which hardly ever used to occur.  However, the continued presence of pest animals, such as rats and stoats, makes it very difficult for many of our native birds to flourish, so some species remain classified as ‘threatened’ and ‘at risk’.  At the Parangarahu Lakes, possum control was initially to protect the new trees in the revegetation plots, but recently the trap network has been extended to give more complete coverage. 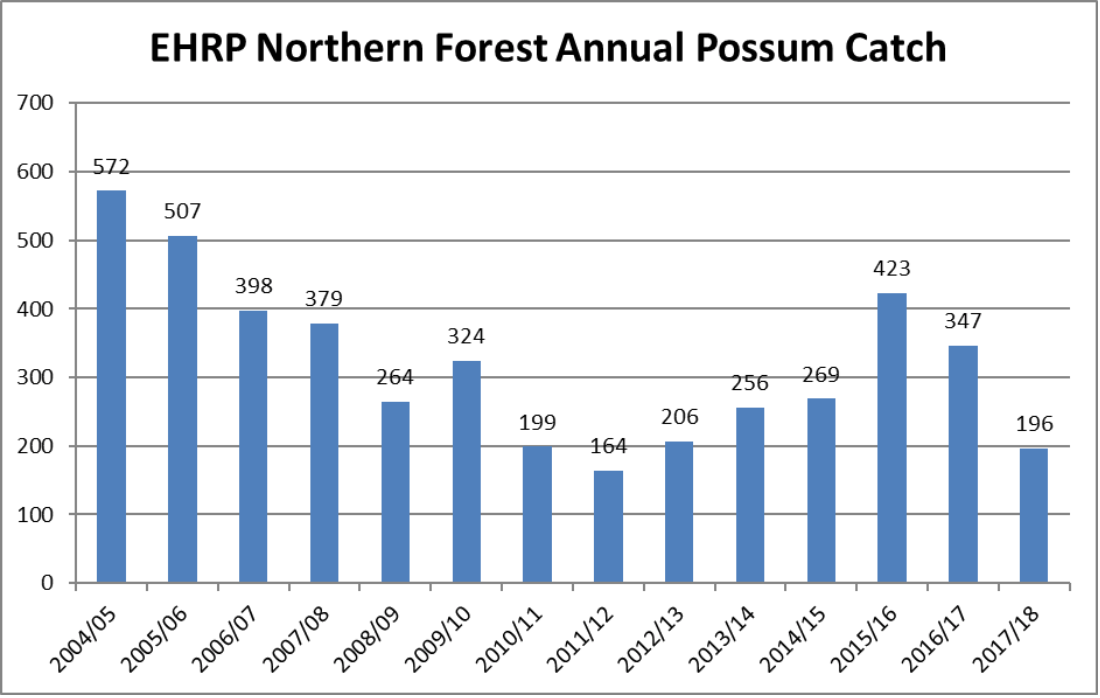 Stoats, along with weasels and ferrets (together known as mustelids) were introduced to NZ in the 1880s to help control rabbits.  They are agile climbers and voracious predators, eating 5 to 6 times per day and, when able, killing more than they can eat and storing extra food for later. Stoats also prey on rats, lizards and large insects, so removing them from the forest not only protects the birds, but also provides more insects for them to eat, thus making a bigger difference to their chances of survival.

MIRO volunteers service 200 DOC200 stoat traps across the Northern Forest and there are a further 114 deployed along the coastal road and at the Parangarahu Lakes. These traps are the rectangular wooden boxes that you quite commonly come across in various parts of the NZ forest. Inside each box is a powerful spring trap (a DOC200) and a lure (either an egg or a piece of dried rabbit meat) to attract the stoat.  We know from experience elsewhere in NZ that if we operate a well-maintained network of these traps then we will keep the weasel and stoat population at sufficiently low levels to really help our native birds.  It is important that the traps are not disturbed—moving the trap can trigger it, in which case it may sit there unset for up to a month. Being very powerful (so that they kill humanely), the traps are dangerous if not handled by someone trained in their use.

Trapping near the coast is especially important for protecting ground-nesting shore birds, such as little (blue) penguins and banded dotterels. DOC200 coverage of the urban area and adjacent foreshore is provided as part of the ERAT project.

Given current resourcing and control methods, it is very difficult to effectively control the rat population in an area as large as the Northern Forest (1,600 ha). While the DOC200s target stoats, they also catch rats (nearly 500 in 2017), but their spacing is too large for effective control. The Mainland Island (essentially a sanctuary without a fence) is a portion of the Northern Forest where there are closely spaced poison bait stations serviced by Greater Wellington. Monitoring results show that rats are well controlled in the Mainland Island. In urban areas it is easier to control rats, as there are plenty of enthusiastic people to set and clear traps on private property. The ERAT Project aims to reduce the urban area and foreshore populations of rats (and mustelids) to very low levels.

Hedgehogs are predators of both ground nesting bird’s eggs and lizards, so it is especially important to remove them from the foreshore. The existing DOC200 coverage achieves this.

MIRO’s trapping programme is supported by Greater Wellington and other volunteers, such as the Days Bay Menzshed and the Eastbourne Scouts.  The ERAT Project has support from Hutt City Council and from the Ministry for the Environment through a Community Environment Fund grant and relies on many volunteers and residents.

The ERAT Project uses GIS in Conservation for its catch upload.